“To win the entire world for the Immaculata and, through her, for the Most Sacred Heart of Jesus.” - St. Maximilian Kolbe
The Miraculous Medal

The Miraculous Medal, Silver Bullet of the MI 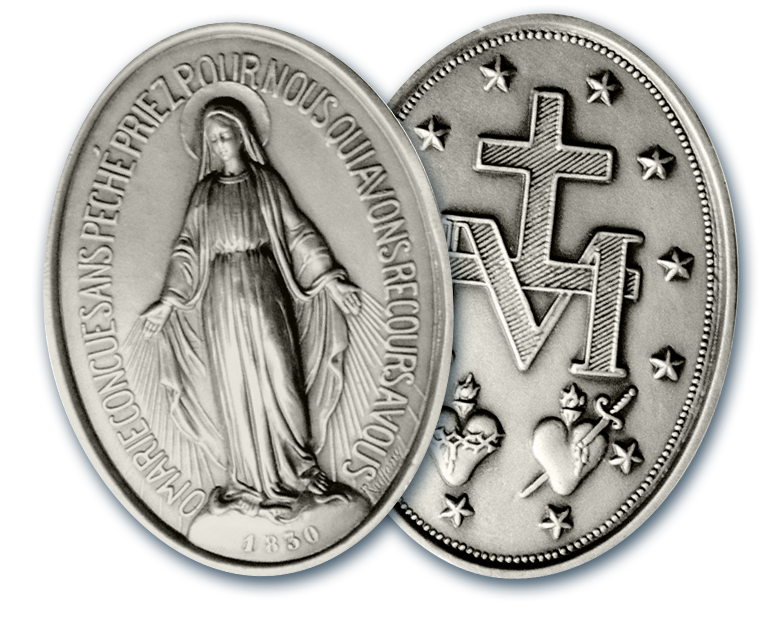 The so-called Miraculous Medal is universally known. Its origin dates back to 1830, and the fortunate soul to whom the Most Blessed Immaculate Virgin Mary showed it was Catherine Labouré,1 at that time a novice of the Sisters of Mercy, in Rue du Bac, Paris. Let us listen to her story:

“On November 27, the Saturday before the first Sunday of Advent, while I was doing my evening meditation in deep silence, I thought I could almost hear the rustling of a silk dress, which reached me from the right side of the sanctuary, and I saw the Most Blessed Virgin near the painting of St. Joseph. She was of medium height, but of such extraordinary beauty that it is utterly impossible for me to describe her. She stood upright and was dressed in a white dress with reddish highlights, similar to those usually worn by virgins, that is, buttoned to the neck and tight-sleeved. A white veil covered her head and fell down on both sides to her feet. Her forehead was adorned with a small strip of thin lace that clung tightly to her hair. Her face was partly uncovered and under her feet lay the terrestrial globe, or rather a hemisphere, because I could see only one half of the globe. Her hands, raised to the waist, gently held up another globe (symbol of the whole universe). She kept her eyes turned toward heaven, as if to offer the whole universe to God, and her face shone with ever brighter radiance.

Suddenly there appeared on her fingers rings adorned with precious gems of great value, sending off rays of light that spread out in all directions; these rays surrounded her in such splendor that her face and her clothes became invisible. The precious gems were of varying size, while the rays coming out of them gave off more or less intense beams of light.

I cannot possibly express all that I heard and felt in that short period of time.

At this point I am no longer able to describe the impression that I felt at the sight of the rays that shone so dazzlingly. Then the Most Blessed Virgin told me: ‘The rays that you see emanating from the palms of my hands are the symbol of the graces that I bestow on all those who ask for them,’ and with that she gave me to understand how great her generosity is to those who turn to her… How many graces she grants to all those who call upon her… At that point I lost consciousness, fully absorbed in bliss… Then the Most Blessed Virgin, whose hands were pointing to the ground, was surrounded by some kind of oval frame, on which appeared the following inscription in letters of gold: O Mary, conceived without sin, pray for us who have recourse to thee.

Then I heard a voice saying to me: ‘Have a medal struck according to this model; all those who wear it will receive great graces, especially if they wear it around their necks. I shall bestow many graces on those who put their trust in me.’

At that point,” Labouré continued, “it seemed to me that the picture was turning over. And on the other side I saw the letter M, in the center of which stood a cross. Below the monogram of the Most Blessed Virgin there were the Heart of Jesus surrounded by a crown of thorns and the heart of Mary pierced by a sword.”

The vision was repeated three times, and each time Sister Catherine confided in her spiritual director, Father Aladel. But fearing that the whole thing was a delusion, Fr. Aladel kept delaying the striking of the medal. In fact he forbade the nun to even think about it. Eventually he decided to report the matter to the Archbishop, Msgr. De Quélen. When the Archbishop showed that he was in favor of it, the medal was finally struck. It was the year 1832.

Amazing miracles of conversion started to occur immediately, and demand for the medal became so high that as many as 80 million of them were struck in the first ten years.

Is it not fitting, therefore, that as we consecrate ourselves to the Immaculata without reserve, we should grace our chest with the Miraculous Medal? This medal, then, is the external sign of consecration to the Immaculata: it is the second condition.

WATCH THIS VIDEO AND BE PART OF OUR LADY’S MISSION!